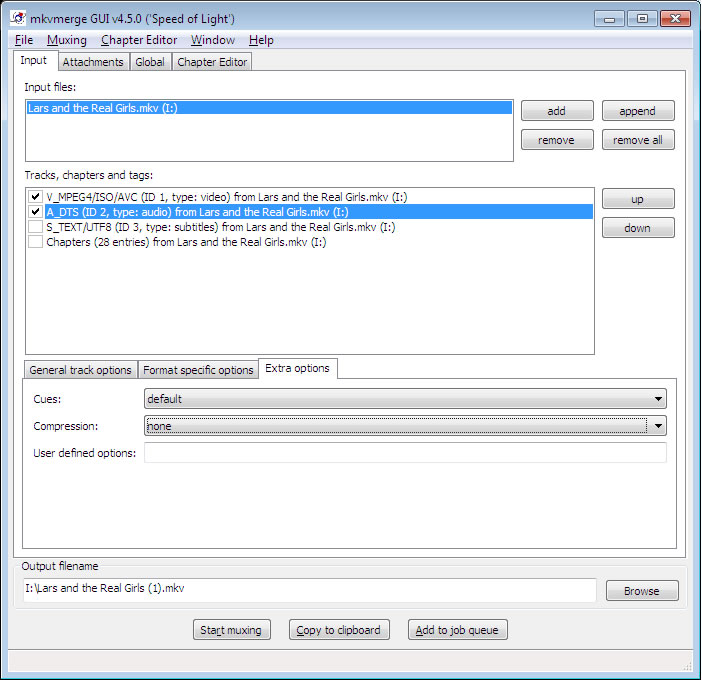 I am sure I do not stand alone when I say the recent problems converting mkv’s with mkv2vob has been frustrating.  It seems over the last several months less and less files have been successfully converted without the dreaded “tsmuxer.exe has stopped working” or video with no sound.

After pounding the forums and playing with my own settings I have figured out a way to convert 99% of the mkv’s for HD streaming to the PS3……with sound! First off you need to uninstall your updated version of mkv2vob and donwload version 2.4.7 here

Once you install 2.4.7 it will ask you to update DO NOT UPDATE, click the configuration tab and immediately uncheck the automatic update box – your settings should look like this

Once you finish downloading install the program (and its free woo-hoo) – open up mkvmerge GUI.exe and drag your mkv file over into the “input files”windows.  The name of the file should appear in that box and under the “tracks, chapters and tags” box there should be a list of the video, audio and subtitle tracks in the mkv file. Here is where the magic happens, ideally you should only have one video track (should look something like V+MPEG4/ISO/AVC……….) and one audio track (more than likely a DTS stream but sometimes it will be an AC3).  If you have more than those two you need to uncheck the additional tracks 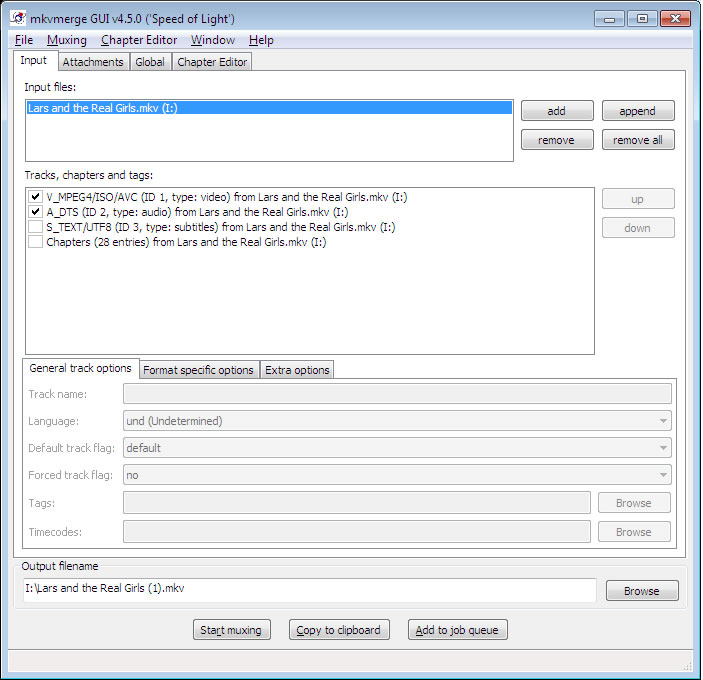 If you have more than one audio track you will need to weed out the non-English or director commentary track, after a few trial and errors its pretty easy to figure out which ones are which. *side note, if none of the tracks say english in the Language box, you will have to find the english track and manually select english, this will cause mkv2vob to only encode the first few seconds of a movie or crash all together.

ok, now that you have only the video and audio track checked, click the extra options tab – once there you need to single click the video track, hit the dropdown next to compressions and select none.  Repeat this for the audio track as well – THIS IS AN IMPORTANT STEP, WITHOUT DOING THIS ON BOTH THE AUDIO AND VIDEO, MKV2VOB WILL FAIL

Once that is done you can go ahead and click Start Muxing – it should dump the converted file into the same folder with a (1) after the title (or you can manually rename it) – this process can take up to 10 minutes depending on the size of your file and computer.

Once complete, load the file up in mkv2vob and convert as normal.  I know this extra step seems like a royal pain, but after a few times through it becomes second nature.

Last note, if you like foreign films or need the subtitles it can still be done, I have had mixed results but you would need to leave the subtitle track checked in mkvmerge (compression: none) and check the box “always encode subtitles” and “load subtitles from file” in mkv2vob.  This will make the conversion time in mvk2vob considerably longer and I have had about a 70% success rate with the subs making it. Anyways, thats the most successful work around I have found so far, I have only had a few files give me headaches out of hundreds.

edit 5.22.12 – so I figured out what was throwing the errors and my success rate is now 100% – when you are in MKVMerge and you are selecting your audio and video tracks, under the general track options make sure the audio AND VIDEO tracks have the language set to English, the ones that were breaking were set to und (Undertermined) and MKV2VOB does not like that format and will fail.  I can say this works all the time and even with the subtitled foreign films.  Enjoy