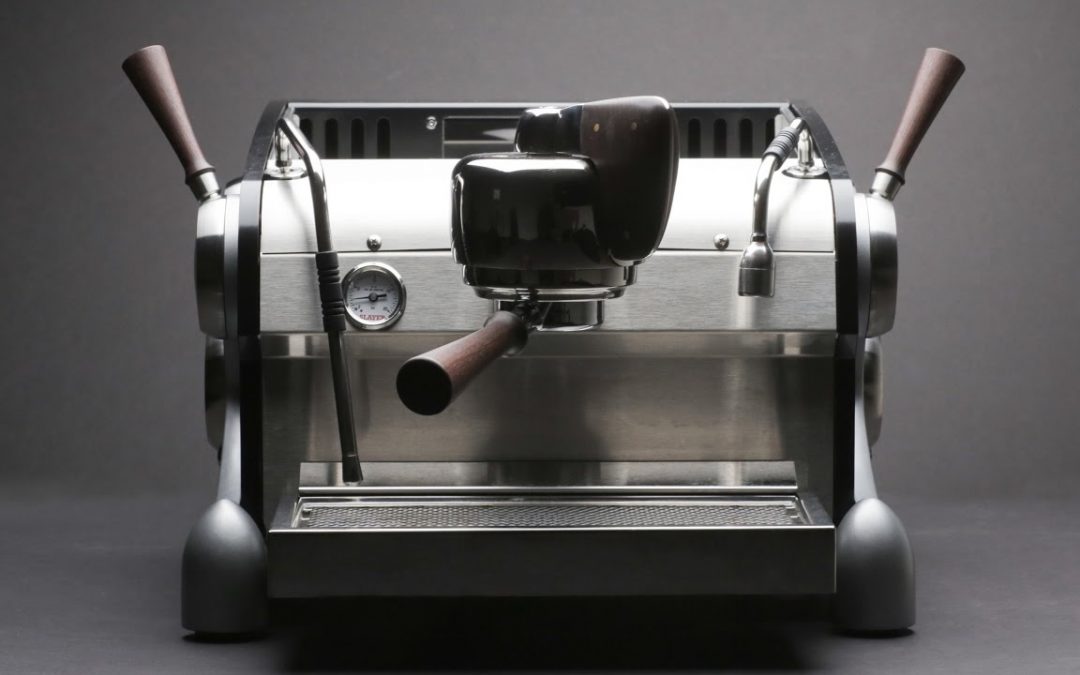 I’ve lusted over this machine for years….. literally years.  Not only is it a powerhouse when it comes to pulling shots, its also the most aesthetically pleasing machine on the market (I mean look at it, its gorgeous).  So you can imagine my disappointment when this beautiful piece of machinery started leaking all over my counter top.

Lets start at the beginning, I’ve been searching for the perfect espresso/latte for a little over a decade.  I started with a Breville POS and one of those dumpy electric blade grinders and was surprised that my lattes tasted like someone poured water and milk over stale beans then tossed it in the microwave.  I quickly upgraded my machine to a Gaggia Classic then discovered Burr grinders. My first was a Breville Smart Grinder, had some good reviews but not suited for espresso.  I moved onto the Baratza Vario which yielded good results, but needed cleaning too often for consistency.  Finally I landed on the Monoloth Flat by KafaTek, to get the most consistent results I needed a single dose grinder that didnt need daily cleaning.  I was very happy with my setup, especially after I installed the PID controller on the Gaggia, but something was still missing – it wasnt quite there yet.  It was time to upgrade the machine to fulfill my quest of the perfect extraction!

Getting the machine really dialed in took some work and a call to Slayer.  I was used to dialing in the grind for new beans, but the Slayer is so robust in features it took a little hand-holding in beginning.  I could dive into the process but that really deserves a dedicated post.

So I finally have this thing pulling unbelievable espresso, I am tasting things I never knew were possible in espresso.  Then I go to the backflush the system and water starts leaking out of the bottom and all over my counter…… I’m bummed, I’ve never had a machine leak on me, not even my Breville POS.

This is what they emailed me:

Unscrew the 4 screws holding in the front panel (two on top, two on bottom)

This will give you a good view into the machine

Locate the drain box on the front left of the machine

Is the box full of water? If so, there might be a blockage from the drain box to the drain tray

take off the drain tray cover and, with a thin wire, clean out the nipple and clear the blockage.If the drain box is not full. Backflush the machine and find where the leak is coming from. Follow the black tubing from the grouphead to the drain box.

I followed the steps and discovered the drain tank was in fact, full of water and not properly draining.  I also noticed that the drain nipple was completely crimped.  I put a screwdriver under the nipple and put pressure on it which did allow the tank to drain.  The bad news was it slipped and left some nice scratches on my brand new machine…. 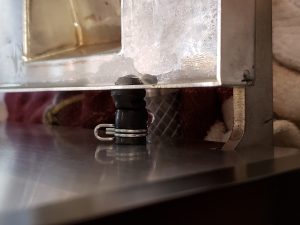 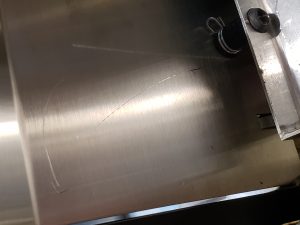 I responded to the email with my findings and they came back with this:

The tray was already on the furthest possible setting, so there was no place to move it.  I requested a new drain nipple.  This was their response:

As much fun as it sounds to take apart my brand new machine again, I just jammed some hand towels under my machine and dealt with the leaking for a few months…

Im off for the holidays and decided it was time to stop swapping soggy towels and fix my really expensive leak machine.  So I went to work and took it apart, after I removed the cover and the bolts holding the drip tray in place, it magically started draining (the crimp was released)  it was kind of gross what my drip tank looked like after being soaked in water for a few months. 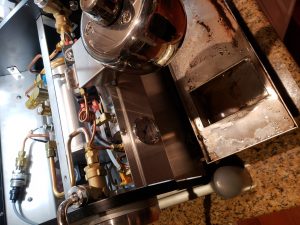 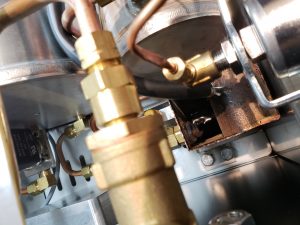 I made sure there was no blockage in the tank, I cleared it with a bamboo stick and used my pour over kettle to run a few tanks through to make sure. 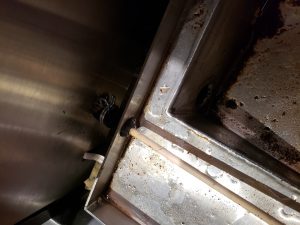 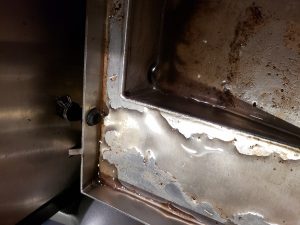 I followed the instructions and cut the nipple, then reinstalled the tray….. still blocked.  So I took the tray bolts out and again and cut some more off…. still blocked.  When I completely removed the nipple (before the 2nd cut) you can clearly see the nipple is crimped (also a pic of the first and second trimmings).  BTW, removing and reseating the nipple was probably the easy part of this whole process. 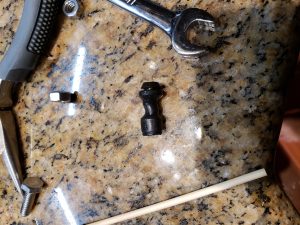 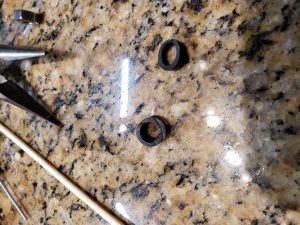 So I decided to leave the tray with no bolts in, I found some boxes to hold the tray enough to drain properly from the nipple and the bottom drain in the tray. 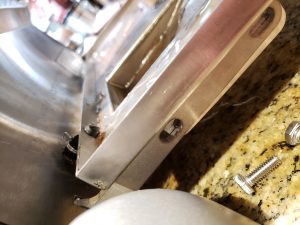 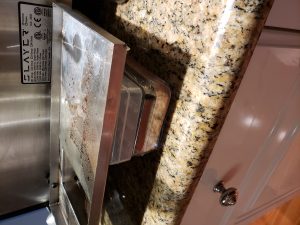 I am going to reach out to Slayer again and I really hope this time they listen to my initial request and just send me new drain nipple.  Its probably the cheapest part on the entire machine.  I do love the shots this beast pulls, but am disappointed with the customer service and quality control (with the prohibitive price tag I highly doubt this is a mass produced machine)  Maybe the company is still settling in from being acquired by Gruppo Cimbali last year, I dont know.  I do know I want it to stop leaking on my counter.
Also if anyone has any ideas of a better nipple drain solution, I am all ears.
****UPDATE December 2018****
Nathan from Slayer reached out to me and was incredibly helpful.  He apologized for the way my support issue was handled and assured me he would take care of it.  First thing he did was send out a care package full of maintenance parts, an upgraded shower screen/thermostat and 2 replacement drain nipples.  He also offered to have someone come over to my house to remove the scratch on the front of my machine.  I declined the generous offer since I put the scratch on there, so he offered me a t-shirt which I gladly accepted. 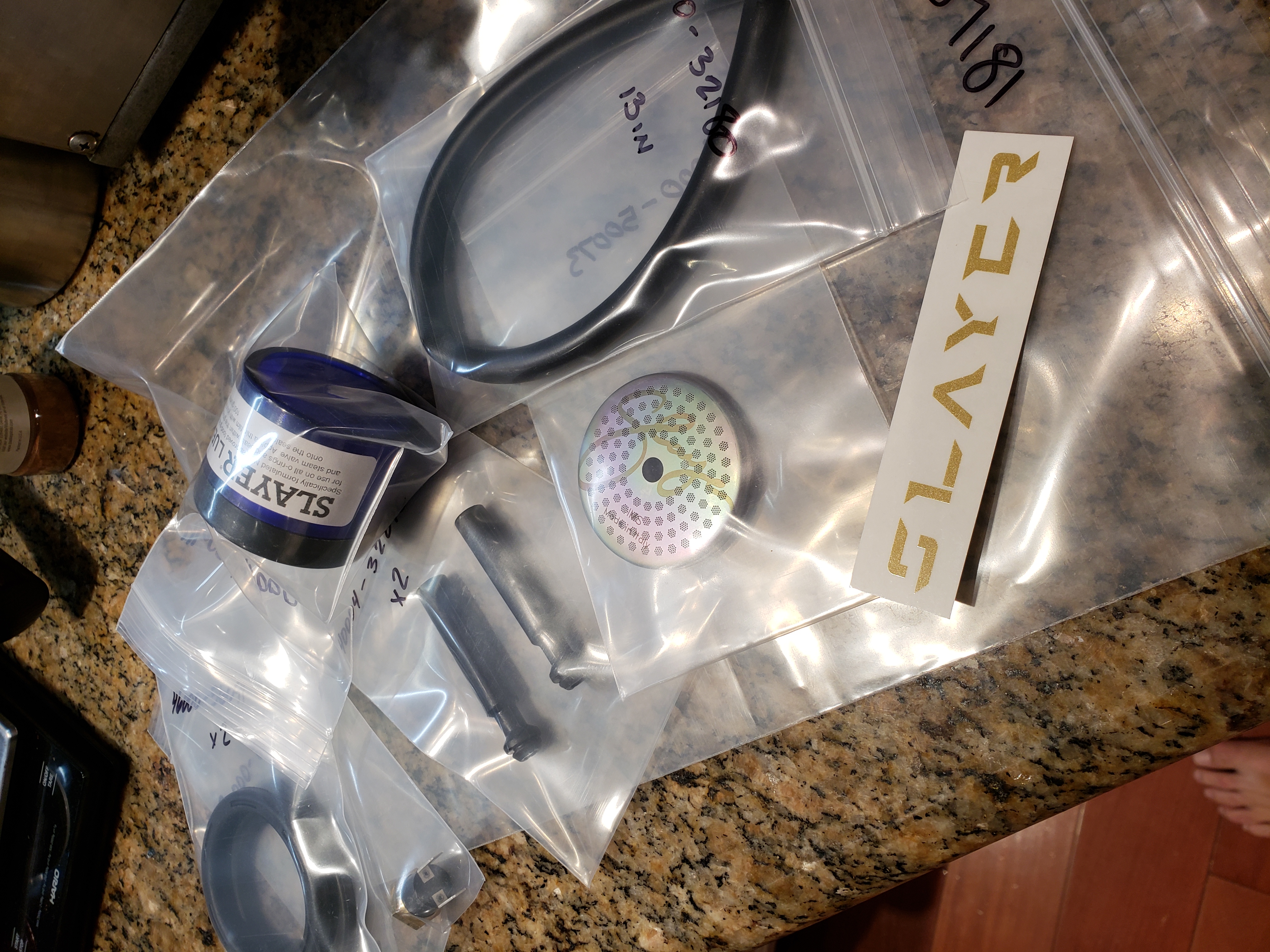 I replaced the kinked nipple and voila!  Free flowing drainage and no more leaky mess on my counter 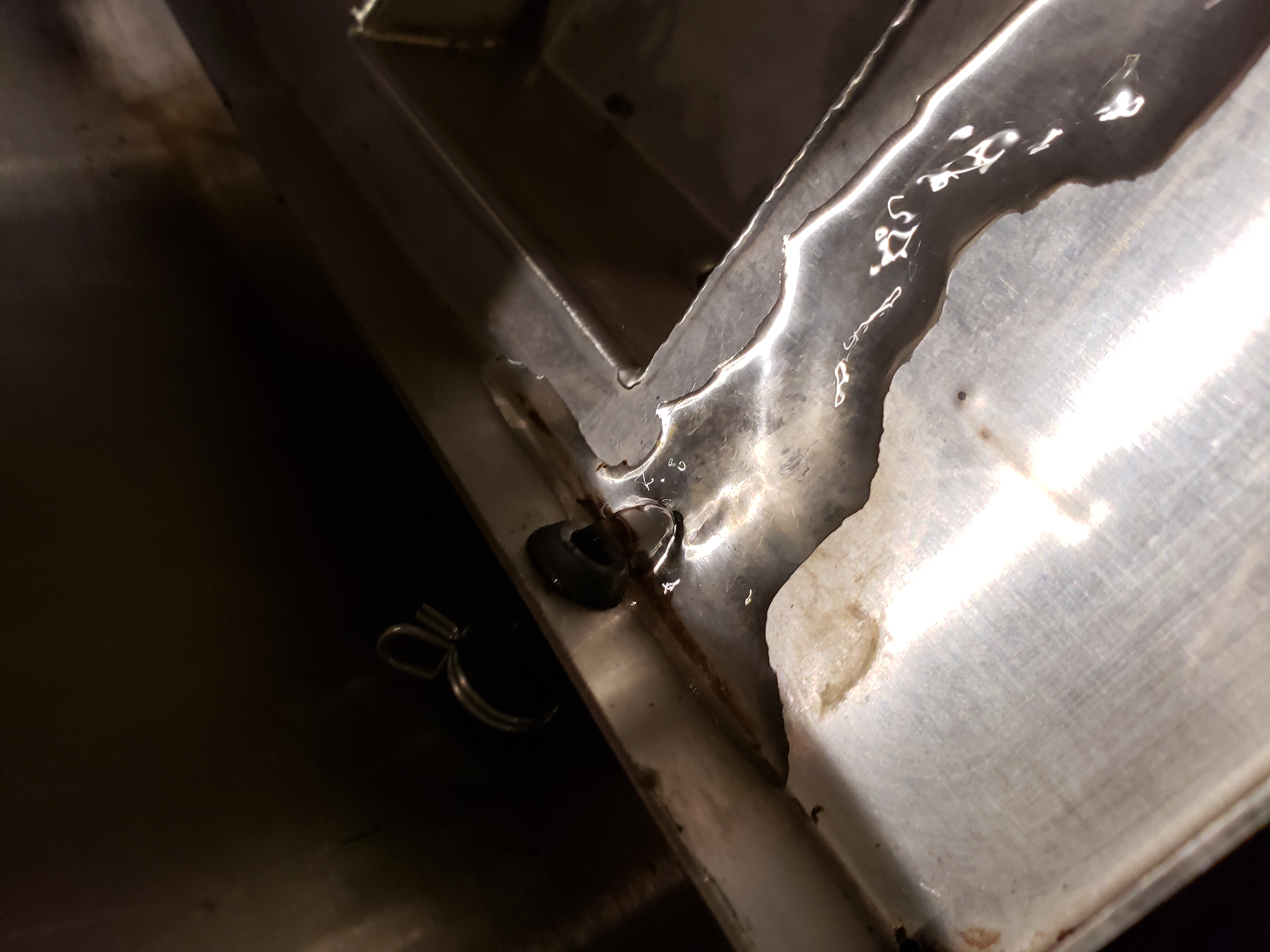 After I told Nathan about my success he was delighted and then proceeded to walk me through dialing the machine in.  I had already purchased a Scace 2 and Fluke thermometer so Nathan did a Skype session with me while I adjusted the brew pressure and dialed in the temperature offset.  He really went above and beyond my expectations and changed my impression of the company.  Once the machine was perfect he introduced me to Sarah, the Slayer flavor expert.  Sarah is also amazing, she made some coffee recommendations then walked me through flow rate adjustments, temp and grind settings to get the ideal extraction.  I never knew coffee could taste this good.

A big thank you to Nate and Sarah for making this customer incredibly happy.